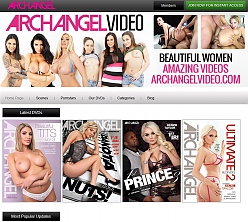 When he was with Elegant Angel, Mimefreak became known not only as an early HD adopter, but one of the most skilled utilizers of the increased detail and contrast. Archangel Video's High Definition scenes can be streamed or downloaded at both 720p and 1080p resolutions, looking great in either, while photo galleries make it to 2000px and 4000px resolutions, online and zipped.

Now home to a generous archive of 200 scenes and galleries (each), nobody can say Archangel Video is slow on its feet. Adding new episodes quite frequently, usually about twice-a-week, Archangel has grown very well and is worth the pride of admission whether you snag Mr. Pink's $19.95-per-month discount or not.

Cons:
This is likely not an issue for most viewers, but Archangel seems determined to only offer MP4-format videos, ditching the once standard WMVs, AVIs, and MPEGs in favor of this Mac-favorite format. Windows and Linux users might not appreciate this decision. What's a few more format options to the one and only Mimefreak?

One minute you're gawking at Veronica Avluv's three gaping, gushing holes, the next you're hit with a giant half-page ad pushing you towards other pornsites, none of which have anything directly to do with Archangel, either stylistically, sexually, or otherwise, a discount deal to Elegant Angel aside.

Mimefreak's Elegant Angel work remains at that studio's site. it'd be great to see some kind of deal allowing licensed viewing of those titles, many of them among Mimefreak and Elegant Angel's best, via Mimefreak somehow and packaged with Archangel Video for the ultimate Mimefreak fan package.