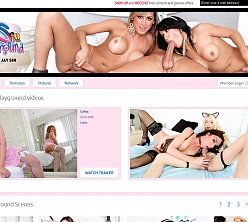 From acclaimed director of deviant sexual entertainments, Jay Sin, comes a site that discard “regular” and “real” women in favor of ladies whose femininity couldn’t be constrained by a set of cock ’n’ balls. TS Playground sees sexy trans-women from all over the world throwing themselves into Sin’s latest epic trans-hardcore adventures. With HD video streams and downloads and some seriously tantalizing photo galleries showcasing Sin’s brilliant style and eye for talent, TS Playground is an all out hardcore trans-party!

Pros:
The stars of TS Playground may not be the world’s most well-known trans-pornstars, but they’re doing a damn fine job of convincing us viewers to give more trans-porn a shot! Many Asian cuties can be seen here posing with their cocks in hand, their asses and tits out, and a “let me suck that for you” smile across their faces. African American, caucasian, and Latin models also appear under the masterful direction of Jay Sin.

Making an appealing TS endeavor start to seem utterly unmissable, all those subscribing to TS Playground receive free reign to wander around the Evil Angel network and its thousands upon thousands of delightfully kinky, definitely hardcore scenes, all at no extra cost. And, now slashed to only $14.95, your first month inside TS Playground isn’t just affordable, it’s a fucking fine-ass deal for trans-porn aficionados and new fans alike.

Cons:
Of all the network sites included in your TS Playground access package, only four cater to trans-porn fans. She Plays with Her Cock, She-Male Idol, and I Love Black Shemale make up the rest of EA’s trans contingent and, while there’s a lot of quality trans-smut here, it’d be great to see sites devoted to trans-and-cis couplings, for example, arrive.

Most of the models appearing here will be unknown to all but the most tirelessly devoted chroniclers of trans-porn history. Seemingly hailing from various parts of South-East Asia, these foxy young sluts aren’t given a proper introduction here, their profiles left basically blank and very little info coming from them personally in to-camera intros and interviews.

Finding such a solid trans-hardcore collection produced by an acclaimed director like Jay Sin, hosted by world renowned deviants Evil Angel, should be enough to keep any tranny fanny from bothering with brick and mortar retail stores (and their nondescript brown paper bags) ever again. The fact that much of this TS Playground archive can be found in both DVD and digital forms from other vendors may annoy those seeking total exclusivity.

Conclusion:
With updates hitting TS Playground every three days and a solid archive now online, a big improvement since our last review, Jay Sin’s lively, lusty TS Playground brings its members a wealth of trans-porn that proves very colorful, both visually and sexually. A cast of dick-equipped beauties from all over the world bring their unique talents and tastes to the screen in 1080p HD streams and downloads, and in 1920px image galleries that offer a more glamorous and elegant (and initially somewhat softcore) presentation. Strong content, excellent visuals, and a brilliant online base at Evil Angel that includes truly mammoth network access helps push TS Playground above many other trans-hardcore efforts but it’s the reliably inspired look given to TS Playground by its director that really makes this ass-splitting, simultaneous-nut-busting trans-travaganza so enjoyable.