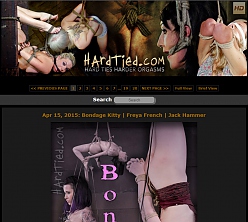 Overview:
Restraint often seems irrelevant in pornography, the media industry of unparalleled excess, but what if that were not so? What if restraint were a vital component of the most accomplished adult productions? That's certainly the case with many of Intersec's BDSM-heavy sites and Hard Tied is no exception. Built around the idea that complete submission requires immobility, this often brutal site takes your favorite pornstar talents and straps them down, ties them up, and otherwise keeps them stationary and begging for release. The masters of this particular domain are Cyd Black and PD, two depraved individuals who seek to put every one of their conquests in a state of abject humiliation, under their complete control, and displayed in all their glory for you, the home viewing audience. Of course, they're well and truly fucked, these starlets, but that's almost just the icing on the utterly depraved cake here at Hard Tied. Such women as Marica Hase, Penny Pax, and Beverly HIlls have come to Hard Tied to be given no choice but submission; it might seem an odd desire to some, but, hey, there it is! And here it can be seen in brilliant HD videos and high-res image galleries allegedly arriving weekly, all of it costing $55-a-month. Waitasecond - fifty-five dollars for a smattering of hardcore bondage scenes? That's it? Man, Hard Tied had better be able to prove itself worthy of such a high asking price, though something tells me that won't exactly be a big problem for one of the fast-growing and quite influential Intersec's strongest (and therefore most hardcore) sites.

Peaking in 720p frames, Hard Tied's videos can be downloaded or streamed and come through clear and strong in either. Although photos only reach 1200px, they generally come in two galleries for every scene, one capturing the same action as the video, the other offering the director's own take on proceedings.

Updated every Wednesday with a new video and pair of galleries, Hard Tied's 421-scene archive is now pretty damn substantial, at least for a site of this esoteric nature. Hard Tied shows no signs of slowing down, either, which is great to see.

Any way you approach it, Hard Tied is insanely expensive. Fifty-five dollars for one month of access is simply far too expensive for most folks to bother with. Even with a multi-month package purchase yielding some discounts, it's probably not enough to keep would-be Hard Tied members from wandering somewhere more affordable.

Unlike certain Kinky competitors, Hard Tied hasn't yet made the leap to 1080p HD video resolutions. Instead sticking with the 720p size it has hosted for a few years, Hard Tied and much of Intersec in general could definitely use a video upgrade, especially as the now-standard 1080p resolutions is offered on many other kink/BDSM sites.

Especially in light of the absent networked access to other Intersec sites, it's still clear that Hard Tied doesn't really offer anything wildly different from other efforts by the same company. Infernal Restraints is another brutal bondage-focused site, as is Real Time Bondage, and although there's some differences, it's not really enough to set them totally apart.