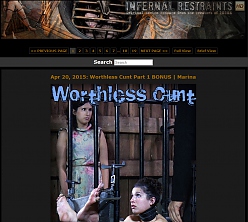 Overview:
The tartarean world of Infernal Restraints sees wiling submissives thrown under the control and domination of a master then bound, flogged, abused, and used in all manner of debauched situations and scenarios. Operated by Intersec, a devoted and accomplished purveyor of porn's most devastating BDSM content, Infernal Restraints operates much like most other heavy bondage sites and tears its misbehaving maidens down from the pedestal we've placed them on and destroys their sense of self-worth until they're left a whimpering mess. Now, doesn't that sound like a hoot for one and all? Infernal Restraints charges a hefty sum for monthly membership but could still see rampant sign-ups thanks to its evocative tour pages. How hefty a sum? Well, let's just say that anyone unable to spare funds enough for a night treating your barroom pals to beverages, you're not likely to find an Infernal Restraints membership all that accessible. (For clarity's sake, Infernal Restraints costs $65-a-month.) With access to Intersec's other sites apparently not included, Infernal Restraints seems to be keeping itself expensive to ward off customers uninitiated in the ways of abject worship, human sexual enslavement, and the most brutal abuse dished out in the name of pleasure. Simply said, Infernal Restraints is definitely not for the faint of heart and should be approached, like any new endeavor requiring ropes and chains and leather straightjackets, with extreme caution.

Looking very nice indeed in 720p High Definition resolutions, Infernal Restraints' videos can be streamed or downloaded at your leisure and provide clear, vibrant visuals throughout. Photo galleries accompany all scenes and come in two varieties: Scene Photography, which captures much of the same action as the videos (just in more detail), and Director's Picks, which shows more casually intense moments.

Weekly updates bring both video and photo content to the site, adding another notch to the impressive current tally of 394 scenes. There's plenty of variety here, too, with older scenes offering slightly more straightforward bondage sessions and recent efforts ramping up the production value.

Cons:
Very similar to other Intersec sites Hard Tied and Real Time Bondage, Infernal Restraints deals with extreme bondage and intense physical abuse. The differences between these sites range from negligible to nonexistent and anyone considering joining Infernal Restraints alongside another Intersec site should look very closely at what's on offer.

With Intersec operating a handful of extremely kinky sites, it's a real surprise there's no such thing as the Intersec Network. All Intersec sites stand alone and success or fail with their own content, not that of their company siblings. The high price of some Intersec sites only makes a network package, even an expensive one, all the more necessary.

Infernal Restraints costs more than taking a couple of buddies to see Mad Max: Fury Road. If you don't have that kind of throwing away money, you'll struggle to find this extremely expensive site worth such a high asking price. Some discounts apply to multi-month purchases, but they likely won't be enough for most humming-and-hawing would-be customers.

Conclusion:
Any site asking $65-a-month for access had better be one of the best in its field. Thankfully, Infernal Restraints is such a site, one packing nearly 400 scenes of totally dehumanizing domination, bondage, and physical abuse. The women featured here undergo extreme bondage involving heavy stocks, tight rope tying, forced oral entry, and the insertion of steel phalluses, giant plugs, electrodes, and other punishing implements, all while kneeling in subservience to their new masters. The 720p High Definition videos and strong photographs capture the action quite nicely, though a 1080p video upgrade would certainly give stronger shots of the women's pained expressions, twitching cunts, shaking thighs, and every little tear drop that falls from their eyes. The online archive is very strong now, holding as it does nearly 400 scenes, and there's no doubt plenty of more inspired updates to come. Infernal Restraints is clearly improving with age and, when you consider that it was pretty fucking great right out the gate, that's marvelous news indeed. Now, how about a price reduction, Intersec, you financial sadists, you!