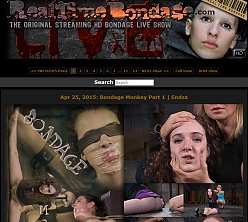 Overview:
Live broadcasts have changed entertainment completely. From the very first live television plays to today's HD-equipped sportscasts instantaneously beamed around the world, the way we view all media changes when it goes live. And, when it comes to sexual content, that change is even more significant - just look at Janet Jackson's Super Bowl nipple exposure! Real Time Bondage takes live sex shows to the extreme, bringing in willingly submissive women, tying and locking them into inescapable restraints then assaulting them with verbal taunts, psychological abuse, and physical devastation of all kinds. Using some very inventive restraints and devices to keep the subs on the brink of collapse from a powerful mix of pleasure and pain, the resident Real Time Bondage doms and dommes inflict major damage and sometimes have their victims whimpering and sobbing through half the damn scene! All of this insane hardcore comes at a price, of course, and that price is $45, a hefty price to pay if you're not totally convinced Real Time Bondage has the salve for your pornographic itch. "Well," I hear you asking your favorite porn reviewer, "does it?" Time for some answers, don't you think?

Pros:
Live broadcasts of some extremely brutal bondage sessions: that's what Real Time Bondage is all about. Thankfully, if you miss a live show you can still catch it here archived in HD for posterity. A well-built site that seems only to be missing a model roster, Real Time Bondage guides your navigation well and even provides a forum where members discuss recent and upcoming live shows.

Rendered in streams and downloads of 720p resolution, Real Time Bondage's High Definition videos are crisp, dynamic, and loaded with detail. Viewers will surely appreciate seeing individual beads of sweat on their favorite fuck-slave's brow and be thrilled by how clearly they'll see thick cocks slide into the holes only just opened by expanding plugs or prying back-gloved fingers.

Every Monday and Saturday sees a new episode of Real Time Bondage make its way online. Usually a continuation of a previous installment, each new scene adds to the strong archive of 241 scenes already here. Each brings both video and photo content to your screen.

Cons:
Costing $45 for one month of access and providing nothing more than a members forum in the way of bonuses - no network access to other Intersec sites like Sexually Broken or Hard Tied - Real Time Bondage will be out of the question for some would-be members and a one-month-or-nothing deal for others.

Watching a woman undergo a complete physical and sexual destruction at the hands of a powerfully dominant master (or two) can be oodles of fun. But watching something extremely similar happen to the very same woman update-after-update can lose its initial appeal. Real Time Bondage adds new chapters to each performer's multi-part obliteration in chapters arriving anywhere from three to thirteen days apart.

Live broadcasts are somewhat infrequent and essentially just give more devoted members the chance to watch a new scene as it's shot instead of waiting until the formal update arrives. It'd be interesting to see what Real Time Bondage could do with an expanded live schedule, even one that offered interactive interviews with performers or behind-the-scenes glimpses.

Conclusion:
Real Time Bondage has a bold and adventurous premise that sees amazingly submissive women go under the complete control of a dom, domme, or other master intent on breaking them mentally, emotionally, and physically for a complete sexual breakdown that's as scorching as it can be scary. The use of extremely heavy restraints, bruise-inducing clamps and ties, and plenty of more outrageous tools (water torture, head-shaving, extreme verbal humiliation etc) might be too much for casual bondage fans, but those after something seriously severe will be thrilled with what's on offer. The live component of Real Time Bondage is somewhat lacking, if only because most members will end up viewing not the live shows themselves, but the archived versions available here in 720p HD. Hey, they make for great viewing too, don't get me wrong, but a heavier live schedule could boost Real Time Bondage into the hardcore pornographic stratosphere where no other sites can compete.