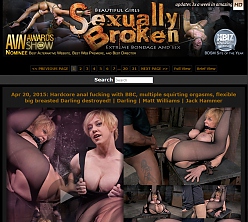 The dark and dingy basement and dungeon-shot Sexually Broken scenes could easily look quite bad. Shot in very strong 720p HD formats, they in fact look the opposite: crisp, clear, loaded with detail, and holding a great atmosphere of degradation and punishment in most every shot - all this despite not reaching a 1080p resolution. Streamed or downloaded, videos look great.

Amazingly, Sexually Broken manages to add a new scene to its nearly 450-scene archive three times each week, each update bringing a full-length video and two photo galleries (Director's Picks and Scene Photography). And, economically-speaking, Sexually Broken is one of Intersec's more affordable sites and won't devastate your budget.

Most visiting performers stick around for some time and shoot three, four, five scenes for Sexually Broken. While it's great to see, say, Gabriella Paltrova slammed over and over in different restraints, in different orifices, by different phalluses and fingers, it'd be a lot better if they weren't wearing the same (or very similar) outfits. Occasionally repetitive in action as well as look, these multiple-scene shoots are good but need some refining.

Two brief interviews are shot with most of the visiting performers both before and after they've been demolished. Some updates take these introductory interviews and place them at after both the scene itself and the post-defilement interview, which rarely makes sense or seems appropriate.

Without a model roster page, Sexually Broken lacks somewhere its members can go to peruse the performers, read a little about them and their kinky sexual tastes and habits, and maybe even add their favorites to a list so they're easier to keep track of.