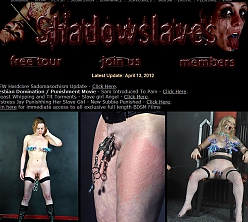 Although it isn't labeled or, I suppose you could say, "pimped" as being in High Definition formats, Shadow Slaves' most recent videos now reach 1280x720 pixels and are well and truly in HD territory. These 720p videos look great are clear enough to ensure you see everything you desire in considerable detail. This is especially neat when the scenes involve piercing, wax, and clamps, which leave visible marks on the womens' bodies.

Shadow Slaves appears to add new content every four days or so, throwing a handful of new photo and video content (the latter segmented) online and adding some new flavor to the existing collection; that collection, incidentally, currently holds around 150 full-length videos and 350 photo galleries; there's also a members forum where you can discuss the content and the kink lifestyle in general.

Cons:
Shadow Slaves shows its age with a poor website design that has clearly not been updated in a long time. I mean, references are still being made to dial-up Internet connectivity issues. If you're still on dial-up, you should probably toss your eMachine before you hurt yourself with adult content this raw and aggressive.

Videos are added to Shadow Slaves' archive in segments and full-length versions of the complete scenes are apparently only made available on separate catalog pages and, it seems, only after the final segment has been added to the main index. (Confusing, huh?) No streams are provided and only a screencap gallery will offer you previews of your next download.

Some of the older videos are unfortunately in pretty shabby shape, sitting rather uncomfortably at resolutions around 428x240 pixels. These videos are low quality, often heavily pixilated, and definitely don't offer views comparable to the more recent 720p encodes. There's even a bunch of really crappy looking 320x240 pixel RealMedia video files further back in the archive.

Conclusion:
A highly original BDSM site that puts submissive young and middle-aged women through the ringer by way of a rash of pretty damn extreme punishments. If you're interested in watching women be spanked, slapped, paddled, splashed, shocked, pinched, pierced, burned, gagged, muzzled, bound, hanged, and otherwise physically, and usually verbally, abused, Shadow Slaves is definitely right up your alley. If you'd prefer to watch the kind of scenes likely found at Kink dot com, scenes that involve penile penetrative sex regardless of how heavily they get into bondage and torture, then Shadow Slaves is likely more than you can (or would like to) handle. The most recent scenes are added in 720p HD video form and in galleries containing 1200px photos, both of which look pretty nice. Unfortunately, videos and galleries are both added in segments and take a while to be made available in their full forms. The site looks like it was created in the late-90s - it even references dial-up Internet - and is a rather unattractive work as well as being somewhat unwieldy. Make no mistake, boys and girls, Shadow Slave has its fair share of faults, but they'll be easily overlooked by those who've been clamoring for BDSM content harder, rougher, and more frightening than what other sites are content to offer. For those viewers, Shadow Slaves is a slice of paradise.