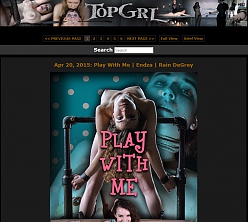 Overview:
As much as we men would like to believe we surrender our social dominance when in certain sexual situations, unless we're the ones being tied up, taunted, and joyously abused, that's usually pretty far from the case. At Intersec Interactive's all-female Top Grl, however, men aren't even in the picture! Pitting a brutal female domme against a resistant yet willing sub, another woman, Top Grl pushes well past even the roughest girl-on-girl hardcore sex and enters another realm entirely. Watch a skinny blonde twenty-something slap and spit on a woman twice her age! See a charming girl-next-door type reduced to a urinating, crying, repeatedly-cumming mess! Marvel at the detail of Top Grl's HD videos as they showcase all kinds of restrictive apparatuses, lashing thrashers, and cruel pinching (and even piercing) tools! Hell, there's even an exercise ball with attached dildo that one poor (or fortunate?) sister is forced to bounce on while being slapped by her bitchy personal trainer! Once the exclusive domain of Sister Dee, Intersec's resident dominatrix, Top Grl now sees a string of dominating women lay into their newfound submissive friends. Are these new dommes worthy of succeeding Sister Dee or are they half-hearted substitutes brought in after a difficult hiatus? Mr. Pink, your preeminent reviewer of pornography both tender and terrifying, has the answers!

Shot in High Definition formats and available for streaming and downloading at 720p resolutions, Top Grl's videos look very good, but not as great as they would in 1080p. Don't let that stop you from ogling and gawking at each wincing face, ribbon-scratched thigh, or pinched nipple, though, 'cause detail still runs high! A pair of photo galleries accompany recent scenes and provide solid alternate views of the sordid goings on.

Updates arrive here once every two weeks and add to the 117 scenes already available. That's not a huge archive, sure, but it ain't a pittance either. Each new sub performer is offered a unique and intriguing path to sexual, psychological, and emotional destruction. Enjoy!

There's something to be said for a site that places one person in the dominant position and simply provides fresh victims every week. After going on hiatus back in 2013, Top Grl came back without the overbearing presence of Sister Dee and instead invited dommes less experienced and arguably less skilled at their demanding work.

After the hiatus ended, another major change was made: scenes became heavily themed and often hinted at pop-culture parody. A multi-part, multi-woman destruction-fest inspired by prison drama Orange is the New Black is the perfect example: dressed in orange prison jumpsuits and brutalized by guards and other inmates, this project drifts away from the standard Top Grl setup of old and won't satisfy all viewers.