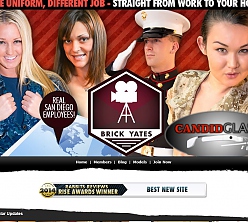 Overview:
All I know about the United States Army, Navy, Air Force, Marine Corp, and Coast Guard, I learned from movies and a PTSD-afflicted Iraq veteran I lived above for six months. While that Marine sergeant did regale me with tales of debauched "libbo" breaks involving huge quantities of alcohol, regrettable tattoos, and insulted locals, he left out the parts about putting his dick in an on-base glory hole, tag-teaming a female soldier, and generally acting like a hyper-sexed hedonism machine. That why Brick Yates isn't particularly surprising. An explicit adult website dealing exclusively in uniform fetishism of the most hardcore variety and featuring uniformed deviants from all arms of the United States military, Brick Yates takes you on-base for an up-close look at the sordid sexual habits of the American solider. Those of you balking at the prospect of watching ripped military men blowing each other should rest assured that heterosexual sex is the bread and butter of Brick Yates and there's plenty of female grunts and officers taking on one, two, even three dudes, all just to let off a little steam after (or before) a long deployment. Getting inside Brick Yates doesn't require you to store the base. Just pay $19 per month and you'll be ogling all the uniformed military personnel you can handle as they do a discredit to themselves, their troop or squad, and their nation, but do right by you!

The guys of Brick Yates tend to be military men and tend to show it off by posing in full uniform or letting the world see their tattooed allegiance to the Marines, Navy, or Army. The guys might not be the focal point of Brick Yates, but they're essential to its success and do a reasonably good job. They certainly look good in uniform!

Surprisingly, Brick Yates is well and truly in High Definition territory with its 720p and 1080p video streams. Although they could buffer more quickly and it'd be great to jump ahead without having to load the video past your jump-to point, they're crisp, clear, and colorful in streaming MP4s. Photo galleries can be viewed online at 1024, 1280, and 1600px or downloaded in the same three sizes.

Cons:
There's very little online here at the moment: 50 videos and 50 galleries only. There doesn't seem to be much order to the updates either, with one to nine days elapsing between recent additions to the site. Bi-weekly updates will greatly benefit Brick Yates.

Brick Yates's male performers seem less than totally enthused about fucking the dames they're paired with. Perhaps they're worried about their C.O. finding out or maybe they're straight-for-pay performers only banging this girl because it tickles their uniform fetish. Who knows? The directing of these scenes could also use a little work. When three or more people are involved, the women are often buried beneath the dudes and hardly visible.

Uniforms are often said to be "100% their uniforms" (they being the performers) but when the usually close-cut and restraining military uniforms they wear hang loose on their frames and are clearly items tailored to another body, that claim is quite suspect. It's mostly female performers wearing ill-fitting clothes; the guys make better use of their camos and dress blues, filling them out with their fit bodies and upright posture.

Probably the biggest disappointment with Brick Yates is the fact that no video content whatsoever has been made available for download. It's streaming-only here, folks, and that's a major bummer.

Conclusion:
Brick Yates is a somewhat underdeveloped site. Using a basic template design that's easy to get around but far from easy on the eye. Also amateur productions, these shoots wouldn't look out of place on most amateur sites, but on one filled with Naval officers and grunts in fatigues, they're a little out of place. High Definition videos are online, but really only the MP4s look adequate, with WMVs coming through quite pixilated and blotchy. Videos are also streaming-only with no download options available. Photo galleries, however, can be downloaded in three resolutions, all quite modest. The actual sex taking place in each Brick Yates scene is fairly standard amateur hardcore shot by a decent camera with a decent light, but is, if you'll excuse the inane jab at military humor, nothing to write home about right now, maybe in six months time though.